5 years ago today, we became Husband and Wife. It only took him 6 and a half years to propose, in utmost style and embarrassment on my behalf but it finally happened.

I remember our wedding day as if it was only yesterday. 10 months of planning from interstate with plane trips back and forth to Adelaide, the day was upon us so quickly. Everyone was amazed at how calm I was. I have no idea what came over me but I was taking in every second of day in the lead up to our arrival at the church. I didn’t want it to end.

My Maid of Honour, my best friend who has been by my side since we were 2 years old was there every step of the way from the extremely relaxing sleep we had in the hotel room my Mother had organised, through breakfast the next morning until we met up with my other Bridesmaid, who has been in my life since we met in primary school at 5 years of age. It was time to be pampered and start with our hair. Champagne was flowing, cameras were clicking and the salon was full of laughter.

Once home the race began to get ready for the photographer who had just been with the boys. From the moment I stepped in to my pink gown my heart started to race. It didn’t feel like me. I felt like a princess. The clincher though was when my Mother pinned my veil in to my hair. I was getting married!

The car ride to the Cathedral felt like hours. We sang Baa Baa Black Sheep all the way with my Flowergirls. I think that was the reason why it felt like it was taking forever 😛 however it ended up we were too early so we drove around the block. Usually I would enjoy the surrounding old homes of North Adelaide, but not today. The jitters were coming. I was told we could be no later than 5 minutes past the time and we were spot on.

We finally pulled up out the front and made our way to the entrance. It was at that moment it hit me. I was going to have over 120 pairs of eyes on me. I froze. I felt sick. For the first time, I was scared. My Grandfather held my hand and told me not to panic. It was then that he asked me what we had to do and I went blank. I couldn’t remember. I turned to him and said “just take me to him…slowly”. The moment came, the choir started to sing Ave Maria, the doors opened and camera flashes were coming at us from all directions. I felt like a celebrity. Actually I really felt like a deer in headlights but you get the picture.

For as long as I can remember I have wanted my Grandfather to walk me down the aisle. When that time finally came we were worried that he wouldn’t be able to walk that far and it was suggested to him that my Brother walk half the way and he walk me the rest. His answer “I either do it the whole way or not at all”. And so we did. It was such a special moment to have him be there beside me.

Our ceremony was quite a traditional. Well, being married in an Anglican Cathedral what else would you do??? 🙂 We had a children’s choir and on our processional the church bells rang. Also being married at 4:30pm dusk was upon us and the inside of the cathedral was dimly lit adding the most romantic feel to the moment. 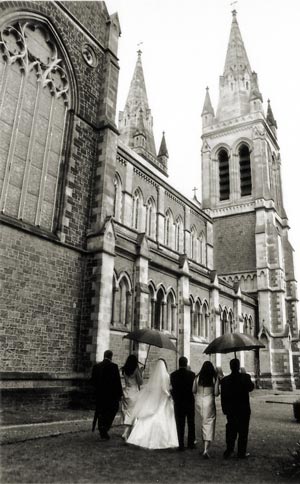 The ceremony may have been traditional but the reception was true to my passion, it was at The Adelaide Zoo. Upon arrival our guests were treated to pre-dinner drinks with Macaw’s flying around them as well as being able to view the animals in surrounding the area which included the lions.

Time flew by on the day. In a flash it felt like our special day had just ended but to be honest even though it all happened so quickly I am so happy that I had all of my family and friends together in one place. We decided to have our Bridal table to the back of everyone, mainly because we had a video screen playing of our lives that we wanted everyone to see but also because we wanted to take in our surroundings. I can still remember the buzz from my Grandparent’s table as they ate, drank and laughed with their Brother’s and Sister’s. My Grandfather even lasted well past 11:00pm.

To this day it all seems so surreal. I remember at around 18 years of age telling my Mother that I was never going to get married. Was I completely wrong! I knew from the day I met my Husband that he was the one and that we would get married and be together forever.

To my darling Husband, I love you more now than I ever have. It may have only been a piece of a paper that granted us the pleasure of formally being Husband and Wife but that day has sealed the deal of our feelings for each other. To this day I still cannot explain why it has made such a difference in our relationship but it has made us stronger than ever. I love you!